I always feel that bug zapper or fly swatter is one great invention of our times. After all, try using your hands to get rid of mosquitoes and other flying insects and you will know what I mean. Out of every ten hand claps, you will probably be able to squash one or two mosquitoes at best. And I don’t think you would want to try this method with flies either. At most, you would only use your hands to wave them away. So, let’s introduce you to the best bug zappers out there. 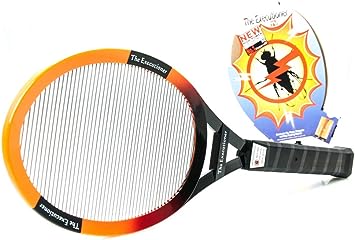 The Executioner Fly Killer Mosquito Swatter Racket turns bug hitting into Wimbledon. The bugs literally explode when they come in contact with the electrified area of the racket. The super tuned electronics on this device makes a cracking sound on every assault, offering you a great sense of satisfaction like nothing else out there.

Basically, it turns a frustrating activity into an enjoyable activity. Not to discount the fact that it’s more eco-friendly than spraying mosquito repellent products all over the house. Seriously, this bug killer is the best fly destruction machine out there. As advertised, it’s tough, deadly, effective, and enjoyable to use.
Pros: 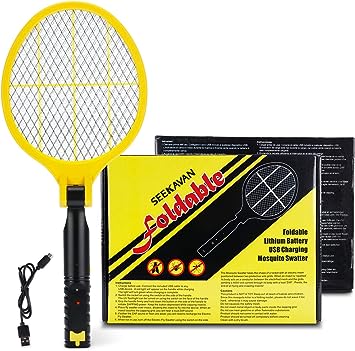 If you hate using sprays to kill flies, this bug zapper can prove to be a great alternative. Seriously, this thing will give you the feeling of using an assault rifle. It has an electric charge to it, which kills flies instantly upon contact. You just have to use it like a regular tennis racquet. Once the fly zapper comes in contact with the prey, it will make a large cracking sound, letting you know that the job is done. As long as it’s adequately charged, this thing will never fail you. Frankly speaking, it’s shamefully satisfying to use this device to kill those nasty bugs, mosquitoes, spiders, etc.
Pros: 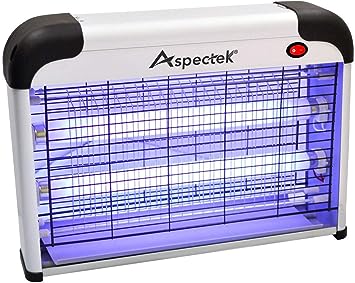 This is a lethal bug-killing lamp that kills flies like a boss. The assaulted victim will feel as if it was electrocuted in an electric chair. Seriously, there’s no escaping from this fly killing device. When the makers claim that the device attracts insects, they literally mean it. The beautiful glowing lights are too good at attracting its prey. The bugs will go straight to this bug zapper and meet their end. The high voltage does its job like nobody’s business. The unit makes a loud cracking noise when it smashes its victim to death. The sound of the exploding flies may seem like music to the ears.
Pros: 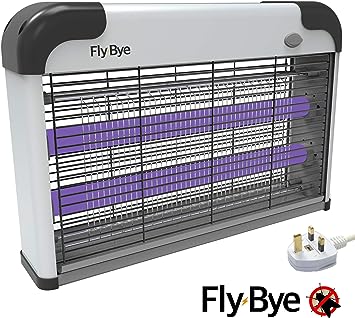 If flies are a regular intruder in your house, you owe it to yourself to get the Fly-Bye – Insect Killer 20W UV Light. Equipped with a 2800V grid, this device causes instantaneous death. It emits a 365 nm wavelength to attract and eliminate insects. Believe it or not, it’s scientifically proven that flies are drawn to this kind of wavelength. When they get close enough, they get zapped to death. The bottom tray that holds the victims could be full of flies. Seriously, bugs and flies stand no chance against their killer device. As advertised, the Fly-Bye Insect Killer works like a treat straight out of the package. That said, it works best in the dark.
Pros: 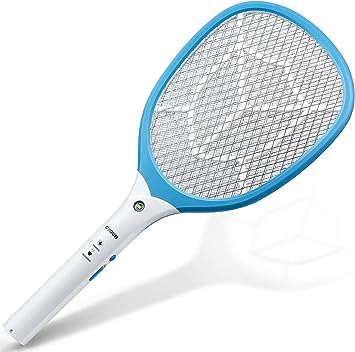 If you want your house to be well prepared for flies, you should get the CYOUH Electric Fly Swatter Electronic Mosquito Fly Bugs Swatter Zapper without any reservations. Equipped with 2700V power supply, this bad boy is powerful, useful, and highly efficient at its intended job of getting rid of flies. Given its lightweight body, you will find it remarkably easy to kill a fly with it. Not to mention that this bug zapper comes with a torch on it that allows you to see the bugs in the dark as well. The best part is that it works against all types of flying insects, including bigger flies.
Pros:

Features Of The Different Bug Zappers

There are actually quite a few electric fly swatter models available in the market, all which look about the same with their racket-like shape. If you are looking to buy one, you should take into consideration a few factors. The first is the voltage that the swatter can discharge. Most will give you 1,500 volts while some can discharge up to over 2,000 volts of power. The strength of the jolt is important because if you have big bugs and flies to zap, the current that the swatter discharges must be sufficient to be able to kill them and not merely stun them for a while.

The next thing you should consider is the weight of the swatter. Some swatters use D-sized batteries while others operate with AA-batteries. Together, they can add weight to the swatter. Therefore, the heavier it is, the harder it might be to wave them at flying bugs and insects, while pressing down on the activation button that will discharge the electric current. If you don’t want to waste money on batteries, you can also consider getting a rechargeable model.

Some electric fly swatters also come with guard screens. These are usually double or triple-layered swatters that protect the user from jolts if he accidentally touches the screen. If you have young kids around, then it may be safer to get a swatter with a guard screen. Otherwise, both work just as well although the ones with the guard screen may require you to toss out the dead insect caught in between the layers.

When You Should Get One

It’s time to get an bug zapper if you have annoying bugs and other insects in your home and garden. But apart from the obvious, it is a necessary tool whenever you are going for a camping or hiking trip as well as a picnic. You wouldn’t want to be feeding mosquitoes while camping nor would you like to have flies sharing your food while on a picnic, right?

Having said that, if you buy a bug zapper, don’t just settle for one. Get a few, if you can. Otherwise, the people around you may just end up fighting over the tool to get rid of the bothersome flies and bugs. After all, you can get them in a pack which usually works out to be cheaper per unit compared to buying only a single item.

Furthermore, these bug zappers can be fragile gadgets. This is because they are made of plastic being low-cost items. Therefore, if you accidentally hit it against a hard surface, it will just break. This will inevitably happen since you will be waving the swatter around to get at the flying bugs. But with an extra swatter or two, you will have another one on hand should you break the one you are using.

This website is a participant in the Amazon EU Associates Programme, an affiliate advertising programme designed to provide a means for sites to earn advertising fees by advertising and linking to Amazon.co.uk. As an Amazon Associate I earn from qualifying purchases.

10 Steps to an Organic Lawn & Garden